We were in no rush this morning, unlike our friends from Georgia who had to be in the lobby at 3am to meet the Viking representative for their trip to the airport.  Talk about a tough flight schedule.  We on the other hand were able to take our time and enjoy our second day in Oslo.

We strolled up (or was it down) Karl Johans Gata in the direction of the train station.  Karl Johans Gata is the main street in the city.  People walking in all directions, coffee shops, street artists and cafes lining the way.  It has many souvenir and fine shops and even fine department stores on and around it.  Have a look. 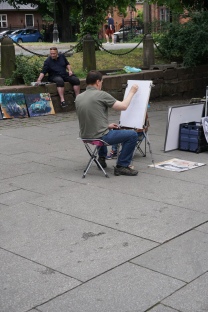 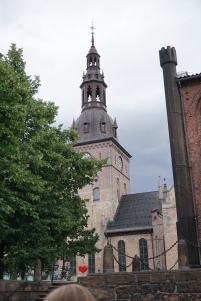 And some more pictures, including a photo of a ferris wheel in front of the train station. 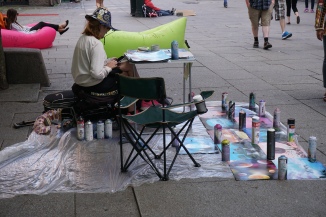 We walked by the Parliament building . . .

The Noble Peace Prize is awarded annually, on the 10th of December, in the Great Hall of the Radhus.  Upon entering the building, in the Great Hall, one is greeted with the largest oil painting in Europe, a work by Henrik Sorensen. 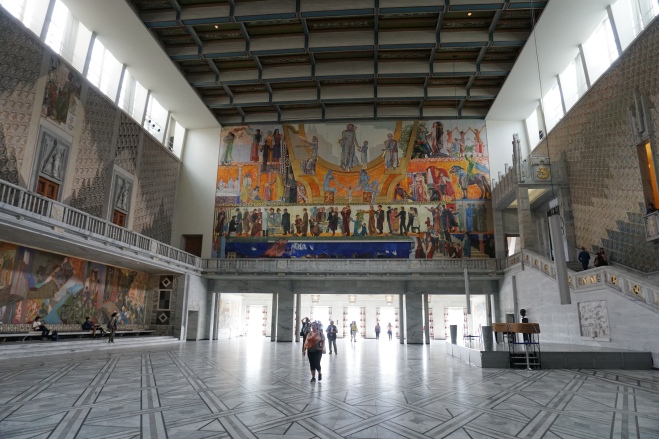 Imagine this hall filled with dignitaries waiting, under this painting, for the announcement of the prize.  How exciting it must be to participate in that great event.

Here are some additional photos inside the Radhus.  I will add captions to the photos, identifying the various rooms and artwork.  Click on the photos to enlarge them. 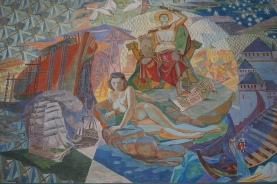 Detail on floor in the Gestgalleriet

Chandelier in the Banquet Room 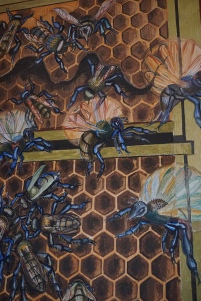 From there we returned to the Bristol to freshen up and head out to dinner at Louise, a restaurant recommended to us by our Viking representative.  It was about a 10 to 15 minute walk back to the harbor.  Louise’s attractive decor was nautical, with dark wood affects.  We were escorted to a nice table on the second level.  Then, shorty after ordering drinks, a group of more than 40, according to our server, arrived to stir up the noise level and occupy the time of a number of servers, including ours.

A liesurely stroll back to the Bristol and another good night’s rest.  Tomorrow is our last in Oslo and the beginning to the end of our journey.