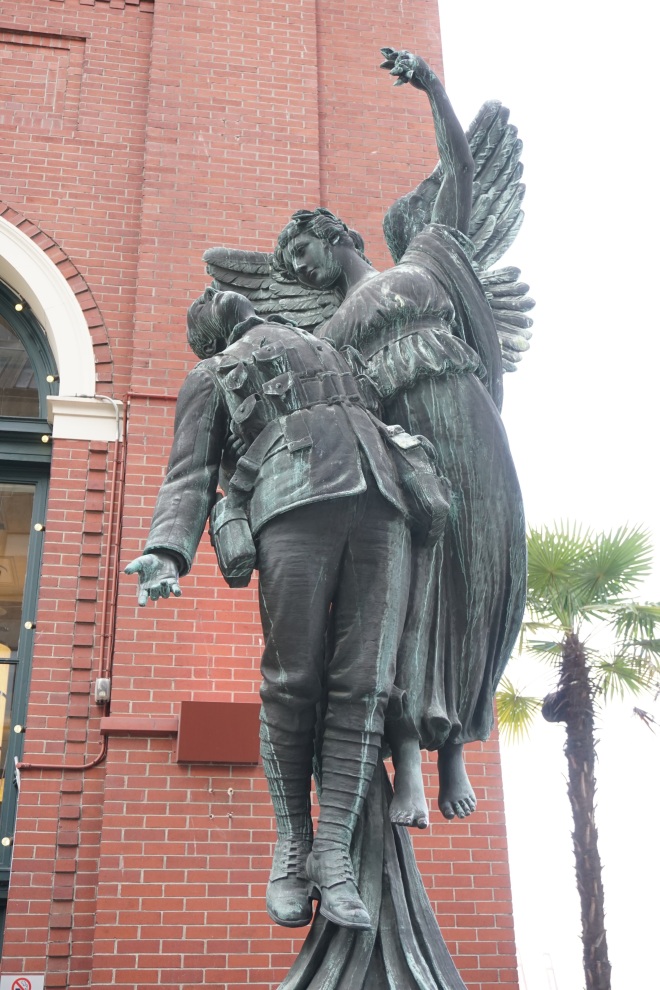 Our first and only full day in this beautiful city. JoAnn and I were last here in August 2018 following a cruise to Alaska with our son and his family. But, it’s Jimmy and Barbara’s first visit and we wanted to make the most of our time. What better way to see a lot of a city than on a Hop On, Hop Off bus.

We bought tickets and jumped on our first bus a little after 10am. We were on the Blue Line, City Route. This took us through the financial district and the downtown area. Monday, the 14th, was cool and the windows were covered with plexiglass. No photos.

Our driver must have thought that Hop On, Hop Off meant drag race start and jam on your brakes stop. He floored the gas and rushed past sites at a furious pace. To see things we were whipping our heads in all directions just to see what we passed and then we experienced whip lash as he slammed on the brakes. But, the scenery was interesting and we decided to stay on for another loop to see what we missed the first time around.

How lucky could we get? The driver changed when we returned to Canada Place and our next driver, Meenu, was terrific. She narrated as she drove and, guess what, she took her time. We were glad we stayed on board. I wanted to photograph much of what we passed and vowed to come back some time to do so.

After lunch at a Canada Place restaurant, we boarded HOHO for a trip on the Green Line, Park Route. As luck would have it one of the plexiglass shades was up, probably because you really could not enjoy the trip with it down, and I was lucky to be seated next to the open window. Photos were now possible.

We started at Canada Place and drove through the city to Stanley Park. Here are a couple of city shots taken from the bus as we drove by.

This photo shows Vancouver building and I really like the pink building. There is building going on all over the city. If you want to live downtown in one of the towering apartment buildings be prepared to spend a lot of money.

The downtown is built along the Burrard Inlet and has a multiplicity of green spaces. It is also a boater’s paradise.

Stanley Park is a beautiful open area with many different venues. The trees, some of which are over 500 years old, are magnificent.

Here, on the edge of the beach just off the Stanley Park Seawall, is a statue of a young woman, “Girl in the Wetsuit,” reminiscent of the Little Mermaid in Copenhagen.

From the Girl in the Wetsuit we could see the Lions Gate Bridge in the distance. The bridge was built by the brewing Guinness Family with their funds so they could reach their properties across the inlet. It’s now publicly owned.

And as we continued our drive I got this shot of the three lane Lions Gate Bridge. The middle lane, so we were told, changes directions every 15 minutes.

Back in the city, I got this shot of the inlet, from the Granville Bridge as we zoomed by. This shot is looking toward False Creek.

And here is one of the skyline also from the Granville Bridge.

As we were on our way back to Canada Place we passed a park with circus tents; Cirque du Soleil is in town. This photo takes in the tents and looks at the dome of the science museum In the background.

Off the Granville Bridge and onto China Town. Vancouver’s Chinatown is the third largest in North America, after New York City and San Francisco. It is the largest in Canada and very interesting. The lamp posts are red and each has its own golden dragon. The street signs are all in Chinese and English.

Adjacent to Chinatown, on the way to Gas Town, is a stretch of about two blocks which is populated with the homeless of Vancouver. It is a sad place where those unfortunate souls sleep, eat and store their paltry possessions. Homelessness is a tragedy everywhere, not just in Vancouver. As our driver said, they are someone’s loved one. Here is a shot of the area later in the day after the people moved on. When we drove by in the morning, on our first circle around the town, there were many people laying on the ground.

The HOHO trips were worth the time and money as they serve as a poor man’s introduction to a new city. As we walked around I came upon this statue to the soldiers of World War I just outside the train station which is just off Canada Place. I find this particular piece of art very moving and emotional.

We decided to walk to dinner and on our way back I tried a few shots of downtown Vancouver at night. Here is a selection.

This sign made us laugh; but for the want of a “p”.

And, last but not least, this photo of the cruise ship port.