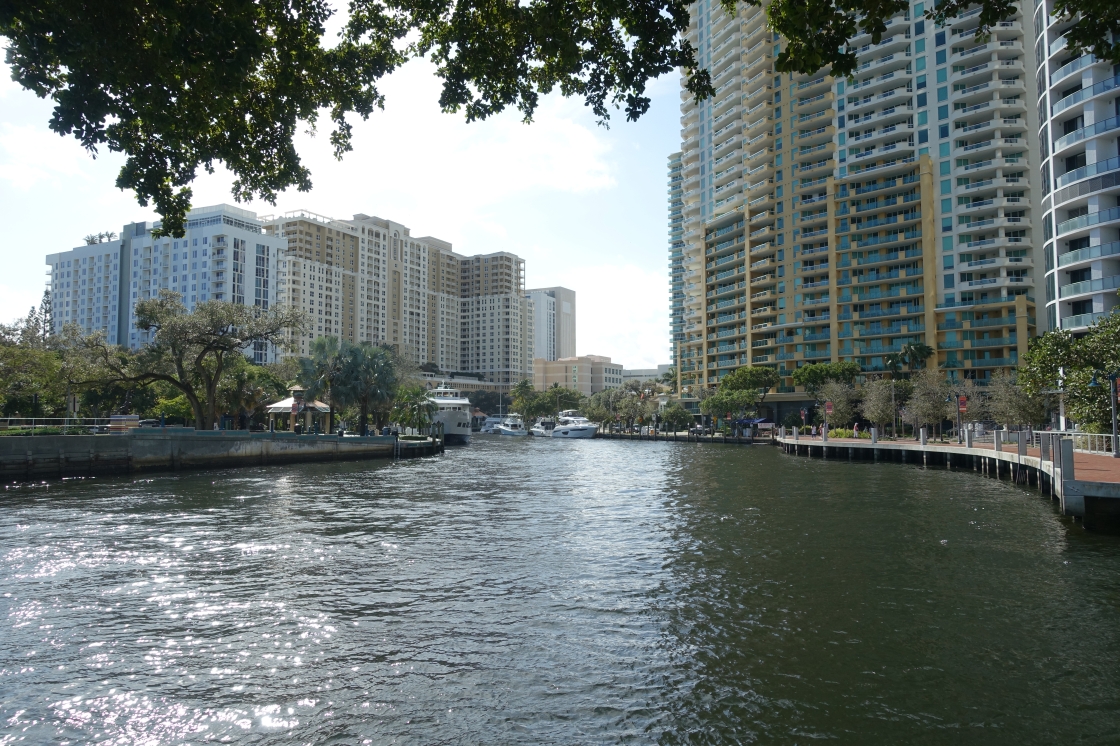 After a leisurely morning, we decided to stroll around the area. There is a lot to take in and we were looking to see what changed since we were last here. By the end of the day we had taken over 13,000 steps and covered more than 5 1/2 miles. I snapped a number of photos. Here are some of the better shots, all representative of what we saw.

Let me start by saying that the area is still undergoing great development.

Here is a shot of JoAnn in front of the Riverside Hotel.

We returned to the Boathouse for lunch. Here is a photo of the entrance followed by a photo taken from the Boathouse looking at the buildings along the Intercoastal.

After lunch we strolled along the River Walk taking photos as we went. The first photo Is of the Riverside Hotel.

And here is one of JoAnn outside of the historic Stranahan House, one of the oldest, if not the oldest, structures in Ft. Lauderdale.

Looking back, over my shoulder, I took this shot of the river.

And this entertaining and colorful sculpture.

This building has an interesting mural painted on it.

And then I saw this “boat” sailing before the wind.

Is it depicting Venice? It looks that way to me.

The last time I recall taking this walk there was a large commercial/entertainment venue facing the river. Now, it is gone having been replaced by soaring apartments and condominiums. As I said yesterday, the only constant is change.

I took this photo of a plant with beautiful purple flowers. I have never seen anything quite like it before.

We came to the end of the River Walk, being blocked by further construction. We walked over to Las Olas Boulevard to begin our stroll back. We were greeted by more recent construction.

The Ft. Lauderdale Art Museum was only a block or so ahead of us. I stopped in the middle of the street to take this photo of it.

We stumbled upon this utility box on the corner as we were crossing the street. Art is everywhere and on everything. Even something as mundane as a utility box can become an attractive piece.

I like what I like to refer to as “wall art” in the form of murals painted on public buildings, fences, railroad trestles, etc. I found this one very interesting. It’s disturbing to see that some graffiti clown saw fit to add a personal touch to the lower right corner of this piece. On the other hand, it adds an interesting counterpoint to the original work.

For perspective, I took this photo of protective scaffolding.

You see these motorized scooters everywhere. Apparently, all you have to do is download the app, deposit some money and you can jump on one of these to motor on.

Las Olas is home to the National Geographic Fine Art Galleries. We popped in there to take a look at some of the wonderful photographs on display. I asked Laura Della Russo, the Associate Director, if I could take a couple of pictures and she graciously said yes. Here are a few. I wish I could take credit for these outstanding works but all I did was reproduce them for our enjoyment.

I like this one because through the magic of reflection I captured a tiger in the clouds.

And last, but certainly not least, I offer this one of haunting children watching over JoAnn as she patiently waited for me.

Then we continued our stroll up Las Olas. I took a couple of shots which I think are representative of the architecture.

As we went we passed a number of art galleries. Las Olas is populated with a number of them. Then we found one which was different as it is a workshop of a number of artists. We stopped in and met Khadine Leon-Spruce, one of the artists in residence. She was kind enough to allow me to take a couple of shots of her work and tools of her trade.

Khadine’s husband Robert Spruce has his work area behind hers. I caught him working when I took this shot.

And this one after he got up.

Then it was back to the Riverside for afternoon libations and, ultimately, dinner at an Italian bistro down the street from the hotel. Here is a photo from our dinner table. The place was busy and noisy.

Back at the hotel; preparing for tomorrow and the Sky Princess.