We arrived in Bergen, after our day in Geiranger.  Sailing into a new port is always an exciting moment for us. The day was crisp and clear and the view was delightful, perfect for photography.  Here are a couple of pics taken as we arrived.

Remember, click on any photo in a gallery and you will open a slideshow and view the pictures in larger size. 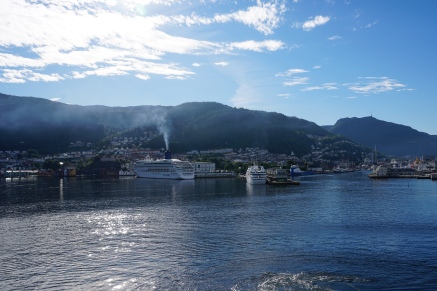 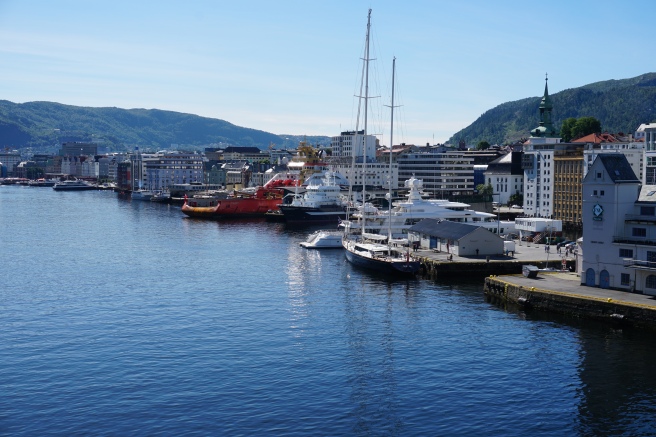 It was a warm (some would say hot) and beautiful day.  We know just how lucky we were with the weather as, according to reports it was the first day in the last 27 that it was not raining.  Bergen on average gets more than 230 days of rain a year and this was the rainiest June on record.  How lucky could we get?

The Star is here for the evening and we are destined to disembark tomorrow.  We are staying a second night in Bergen for a trip to Oslo on the Oslo/Bergen Railroad.  When we disembark tomorrow we will be going on a tour of the city with Viking.  So today we are off on our own to explore the city.

The Star was docked near the Bryggen, which was only a short walk away.  I am always interested, when visiting a city for the first time to see what it really looks like as compared to pictures seen in anticipation of my visit.  Photos of Bergen are almost always of the Bryggen and we were not disappointed with what we saw.  I don’t think I can do the area justice but, lets see what you think. 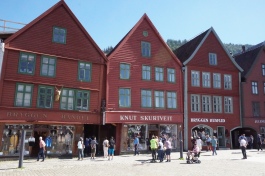 We planned from the time we booked our journey to have lunch at the Bergen fish market.  The task was to pick a place and not wander aimlessly from stall to stall.  Found just the right spot in Fjellskal.  Here is a shot of their display case filled with lots to choose from.

We pointed at a large, and I do mean large, king crab leg.  It was to be split, cut into pieces and grilled.  It was delicious!  Never had better.  And, one leg was plenty for us.  Add a beer and you have a feast.  Have a look for yourself.

I thought, this moment has to be shared with you, our journey partners, and I wanted a shot that spoke about our experience.  So I asked the server if I could take her photo and she graciously said yes.  Then she reached into the tank and pulled out a living, giant king crab.

After lunch we strolled some of the side streets off of the harbor.  Bergen is picturesque and here are a few of my shots. 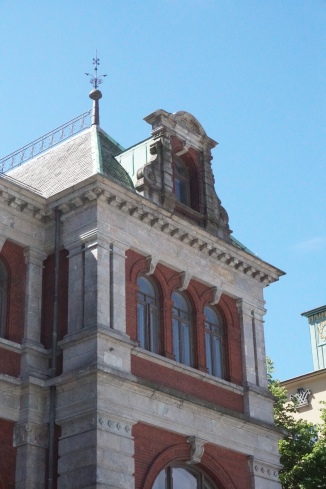 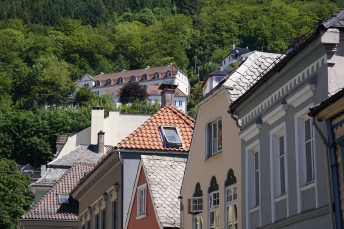 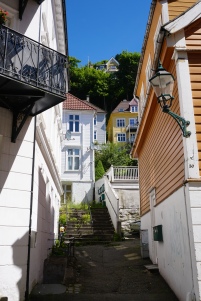 And, a few more of the area.

I was particularly taken with this mural, painted below two windows.  What a message!

We visited Korskirken (Church of the Holy Cross) to take a peek inside.  It dates back to the 12th Century.  I find churches interesting and I enjoy taking photos in them.  I especially like photos of stained glass windows.  The artistic styles of the windows vary from country to country and denomination to denomination.  Norway is a Lutheran country and you can certainly see the different approach to interior church design when compared to Catholic Italy.  The walls of the churches are basically unadorned.  The beauty is in the windows.  Story telling in glass and paint, as is found in Rome and other Italian cities, is not the style in Norway.  But the stained glass is as lovely as one could want.  Here are a few shots of the inside.

From there we walked over to the Floibanen (the funicular) . . . 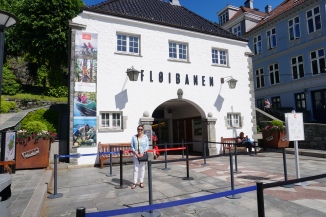 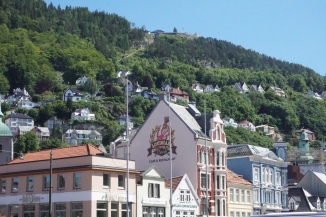 Floibanen with viewing platform at the top

. . . for a ride to the top to see the view.  The view was outstanding and the weather was cooperating.  Here are some pictures of the funicular, the harbor and the city.

We returned to the Star for our last supper at the Chef’s Table.  Tonight’s selection was Asian.  For appetizers we were served hot and sour soup followed by fried prawns.  The main course was wok-fried beef in black pepper sauce accompanied by rice in lotus leaf.  This course, and this dinner, was excellent, as were all the meals we had on the Star.

To be truthful (as I always am), all five of the menus we experienced in the Chef’s Table were well conceived and executed.  While describing their offerings is somewhat difficult let me share their titles as they give an indication of the chef’s creativity:  “Xiang” (Asian), “La Route Des Indes” (featuring spices), “Venice Carnival” (Venetian from the sea), “Sweet and Salty” (a tour of sweet and salty combinations), and “Erling’s Scandinavian Bistro” (presenting the culinary arts of Scandinavia).  One needs a spirit of adventure and a willingness to try new things.  That said, nothing prepared by the chef was too daring or unusual.  Try it, you’ll like it.

Since this was our last night on board, we caught up with some new friends from Southern California for some farewell drinks.  We enjoyed their company and vowed to meet again in Las Vegas.  Some vows are made to be broken and some to be kept.  Only time will tell, but I do like Las Vegas.