We disembarked at 8:30, too early in the morning, on July 1st.  We were more fortunate than others.  For example, our Southern Californian friends had to be ready to leave around 3:00 am for their flight to London.  Talk about early!

We were transferring to the Radisson Blu Hotel on the Bryggen.  But first we were treated to another tour by Viking.  Our first stop was a reconstructed Stave Church, our first Stave Church on the trip.  Apparently a wealthy gentleman from Bergen bought the church some years ago and moved it, piece by piece, to its current location.  Unfortunately, a few years ago an arsonist torched it and it had to be rebuilt.  Today it is used for events, such as weddings, but not for routine church services.  We could only see it from the outside. 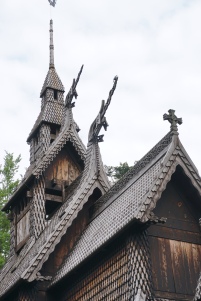 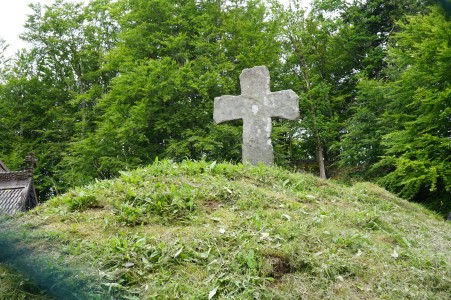 From there it was onto the Old Bergen Museum, a reconstructed 19th century town,

complete with actors.  It was a pleasant visit, with a glimpse into how life had been. 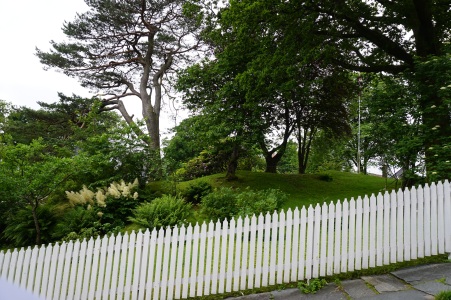 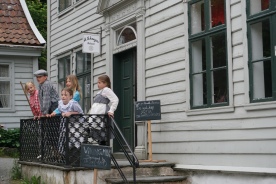 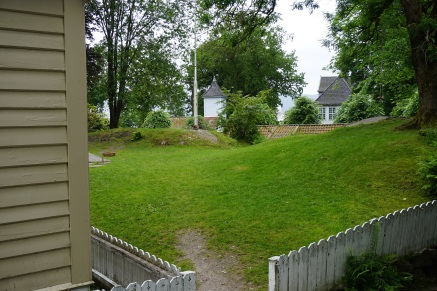 I particularly liked this picture of the children, especially the intensity with which the one young girl appears to be looking straight at me. 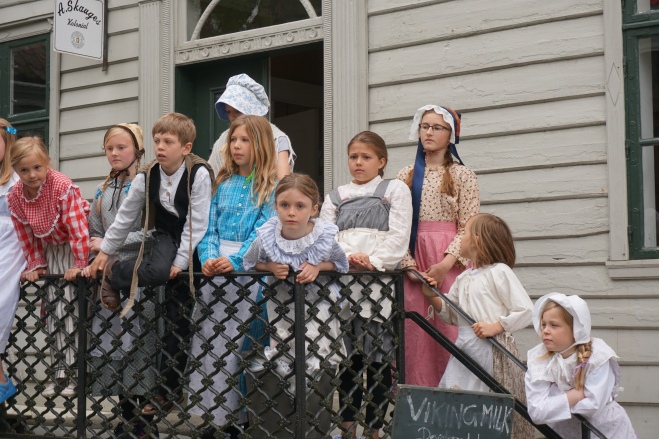 That was followed by a brief visit to the Bergenhus Fortress, one of the oldest and best preserved fortresses in Norway.  We only saw a small portion of the property.  We visited the Hakon Hall and saw, from the outside, the Rosenkrantz Tower.   The roof of the Hakon Hall, as well as other portions of the structure, was destroyed during World War II when a ship carrying 120 tons of munitions exploded in the harbor.  The official story is that there was a problem on the ship and the explosion was an accident.  Interesting fact, however, is that the explosion occurred on a ship carrying German munitions on Adolph Hitler’s birthday.  Coincidence?  I wonder.  Happy Birthday Adolph!

Here are a few photos of the Hall and one of the Rosenkrantz Tower. 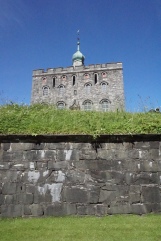 Then, finally, we worked our way over to the Radisson Blu Hotel.  Rooms were not ready so we stored our carry on luggage and went to lunch.  Nothing much, just a couple of beers and a sandwich shared between us.  We sat at an outdoor table overlooking the harbor.  We could see the Viking Star, with its new passengers on board but they could not see us as those passengers were blinded by the beauty of the ship and the experience upon which they were to embark; lucky ducks!

More about lunch; there were pigeons and sparrows walking around the tables, leaving droppings here and feathers there.  People were eating and drinking.  Why, oh why, would people feed the birds, and by doing so encourage them to hang around their dinner table?  Well, they did.  Then there was the table of kids, perhaps with one as old as 13, who were terrified by the audacious birds strolling around without a care in the world.  The kids stomped their feet and hooted at the birds to fly (or walk if the birds preferred) away without much success.

After lunch we set out to explore other areas of Bergen.  We walked past the Bryggen and turned onto Torget which led to the Torgallmenningen, the main square in Bergen; a pedestrian promenade.  As we approached the first thing we saw was the Sailor’s Monument, a sculpture depicting Norway’s contribution in and to the ocean since viking times. 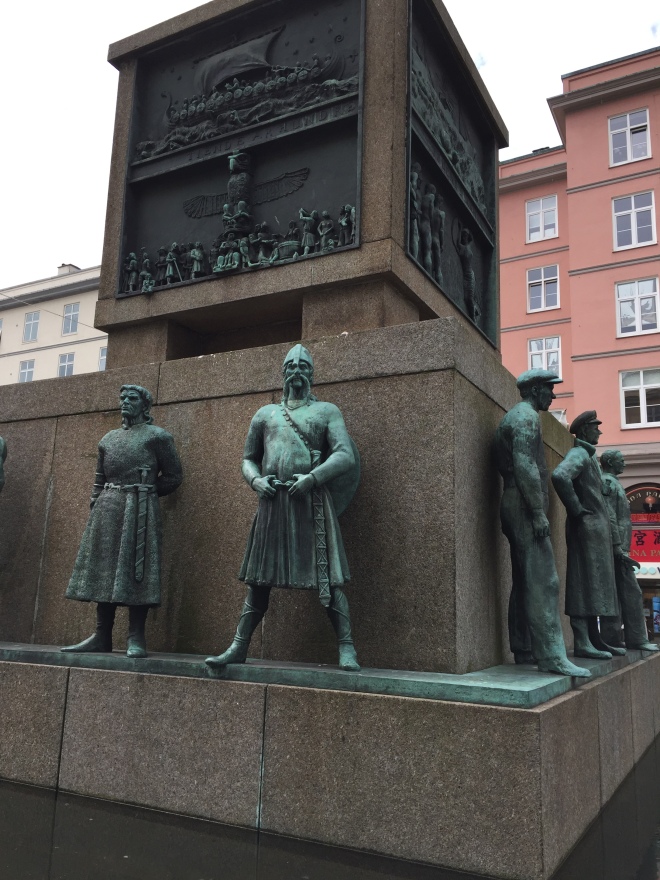 We ambled over to the music pavilion and then walked over to the pool with the floating fountain we saw from the observation deck yesterday. 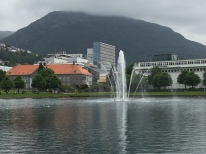 On the way back we saw a statue of Ole Bull.  Ole Bull was a virtuoso violinist and composer.  The statue was lovely and children played all around it.  We saw the theatre and the grass strip in front of it which ran the length of the street.  All very pretty.

Lastly, as we frequently do, we saw a bride, radiant in her gown and vail.  Her photographer was taking pictures of her  and her maid of honor in the Torgallmenningen where everyone could gaze at her. 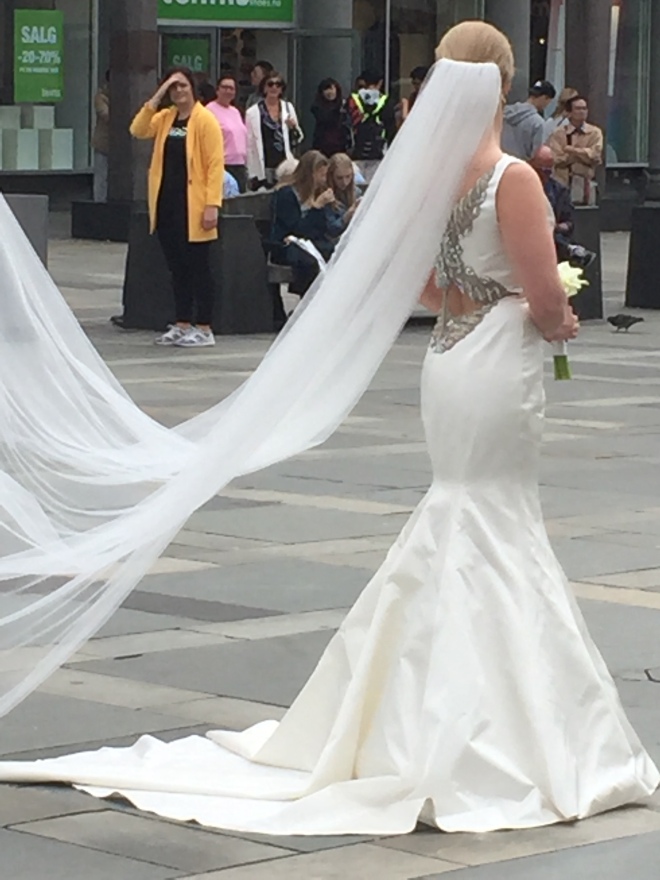 Back to the Radisson to prepare for dinner.  We had reserved a table at Cornelius, a smart restaurant on a minuscule island about 25 minutes by boat from the Bryggen.  We heard good things about the place and were anxious to see it and taste the food.

To get to there we took a boat which was part of the experience.  There must have been 70 people, more or less, joining us on the ride.  We were greeted by staff upon our arrival and invited to have a glass of Persecco and attend a “lecture” by the owner.

He was a suntanned man in his 60’s whose life, so it would appear, was an open book.   The stories he told were entertaining and interesting although perhaps he engaged in some exaggeration.  He was his own best audience, as he laughed at most of his witty anecdotes.  He was fun to listen to as he told us how he started a scollop farm in Seattle, Washington, and later married the daughter of the man who owned the island on which his restaurant stands; what a clever way to get an island.  The food was very good, all seafood, as we expected, but not as good as the hype.  We expected some shellfish but none was served.  That was disappointing.

Then it was back to the Radisson in anticipation of our ride on the Oslo/Bergen railroad and the day to follow.