Curacao is the “C” in the ABC Islands of Aruba, Bonaire and Curacao.  Willemstad, the capital, is designated a Unesco World Heritage Site for its cultural and natural heritage.  The waterfront, with its traditional Dutch architecture, is quite nice. 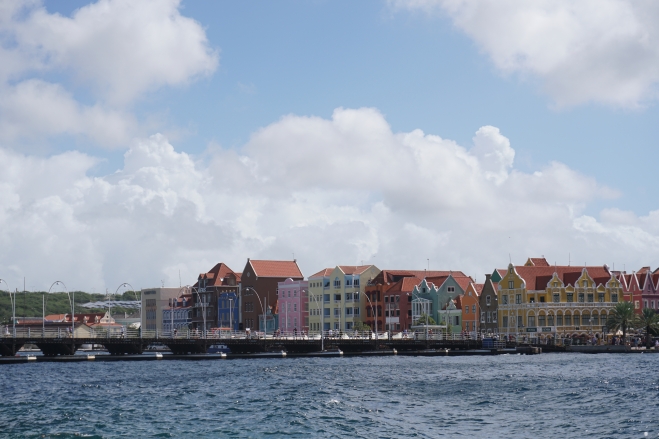 The day was warm and windy.  Rain was not a threat for a change.  As we disembarked around 10:30am on January 30, 2018, we were greeted by the ship’s photographers.  Two nice young ladies who were more than willing to have their picture taken with me.

The area where our ship docked, one of three or four docking sites, is quite different from what we recall from our last visit here more than 15 years ago.  The pier is near the Renaissance Hotel and Casino which has a lovely, upscale shopping area.  The hotel complex was not here on our last visit and is only a hop, skip and a jump from the Queen Emma pedestrian bridge to the Punda area.  It’s the Punda area that I remember from past visits to the island.  Here are some shots of the shopping area. 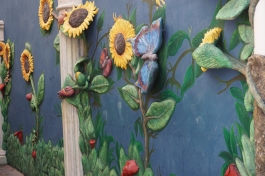 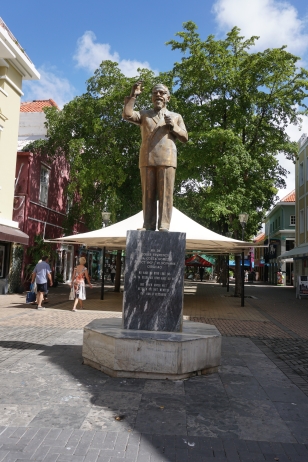 A block off of the main shopping street is the Mikve Isreal-Emanuel Synagogue, the oldest synagogue in continuous use in the western hemisphere.  Here is a shot of the interior, including its sand floor.

Here are two more shots one from inside the synagogue looking out and one through a window looking in.  I know the inside looking out is dark but if you look closely enough you can see the mahogany pew. 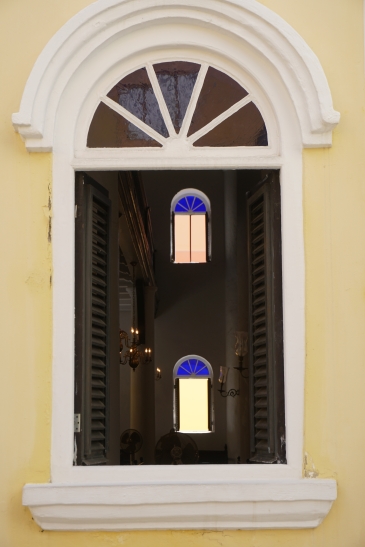 While visiting the synagogue, I spoke with a delightful lady from Senegal who is a member of the congregation.  I asked why I could not take photos in the museum, especially since they were permitted in the synagogue.  Her thoughtful response was that a photograph can be fleeting but our memories, the pictures in our minds, will last far beyond the corporal item.

We decided to have lunch at the Iguana Cafe on the harbor where we could see the Queen Emma Bridge and watch the water traffic.  We enjoyed Bitterballen, a traditional fried Dutch treat often served in bars as finger food.  We used to be served Bitterballen all the time on Holland America but that was a long time ago.

After lunch we walked over to the floating market where venders from Venezuela tie up their boats and set up shop.  According to our guide they sleep on the boats and only return to Venezuela once every week or two.  Makes one wonder where home really is. 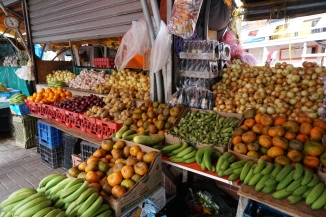 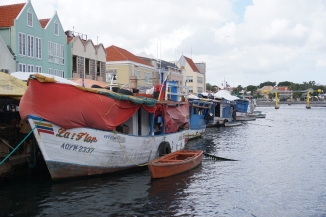 Then we continued on to the central market which was only a couple of hundred yards or so away.  It offered many things as you can see.

We then decided to return to the ship.  Here are a few shots I took on the way back. 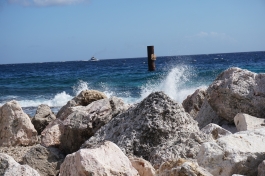 I had every intention of attempting to take some evening photos of Willemstad with the January Blue Moon shining brightly above.  One photo is of me on the balcony of cabin 8235 and the other is from the parapet of Rif Fort, which overlooks the entrance to the harbor.

I especially like this one, although dark, which is taken through an opening in the wall of the fort.  I like the light on the left side and bottom of the opening and the view and color as you look past the bars.

January 31st, our second day in Curacao, and we decided that a short tour, outside of Willemstad, was a good idea.  Problem, from my perspective, is that taking photos from a moving vehicle, through tinted windows, does not provide satisfactory results.  So, only in some instances did I take photos from the bus; here is one of them.  Notice the emergency exit sign on the window.

I took this photo because this house, referred to as the “Wedding Cake House,” is a historically significant property.  It was built by a man out of love for his wife on the event of their wedding.  According to our guide, the reliefs on the supporting columns to the second floor are sculptures of the bride.

Then a stop at the Landhuis Chobolobo Distillery for a taste of “the genuine Curacao Liqueur.”  The liqueur is made from the dried peels of the laraha orange and not the fruit.  We had a little sip of the liqueur and, in my opinion, it is very good. 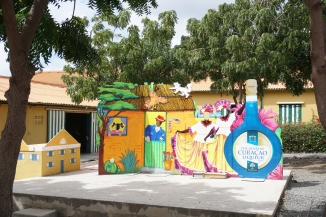 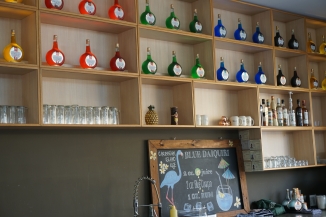 It occurred to me that I represent the places I visit from what I consider a somewhat artsy perspective occasionally to the disregard of a fair reflection of the realities of the place.  As stated on my home page, I am providing a glimpse of places through the lens of my camera; I take photos I like for my enjoyment and hopefully for the pleasure of others.  But, I am also, as much as possible, going to try to provide photographically a more complete picture.  To that end I took some shots of residential areas, through the bus window, to try and give you an idea how people live on Curacao.  I did my best.  Here are some of the better shots.  Although we saw some luxurious properties, homes of wealthy individuals, what follows represents the homes of the average working family.

I took this photo of JoAnn from an overlook.  The other is also from the overlook. 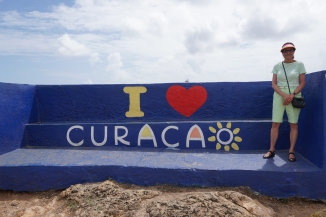 Mambo Beach was our next stop.  It is a very pretty beach, with lots of facilities and it is only a short ride from the pier.  Apparently many sun worshipers from cruise ships camp here for while. 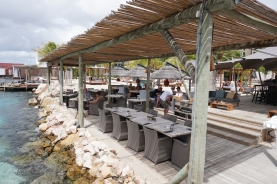 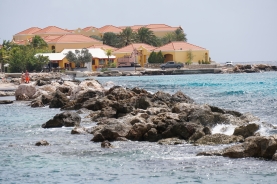 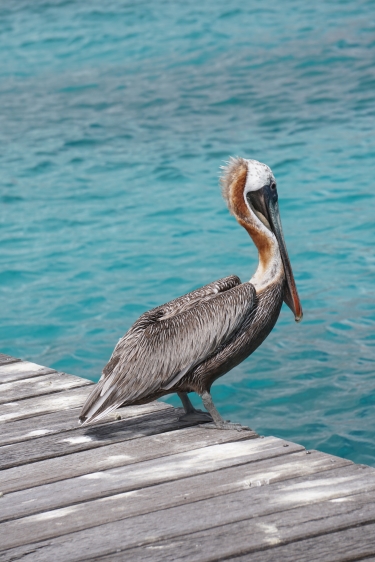 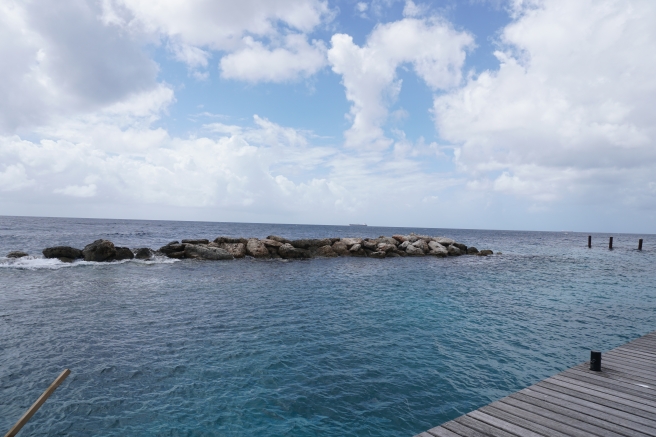 Once our tour was over, we strolled through the harbor area again so that I could take a couple of pictures of things I saw while on the bus.  These are things I found interesting.  The flowered building, park and derelict building are behind the Maritime Museum and across the bridge from the floating market. 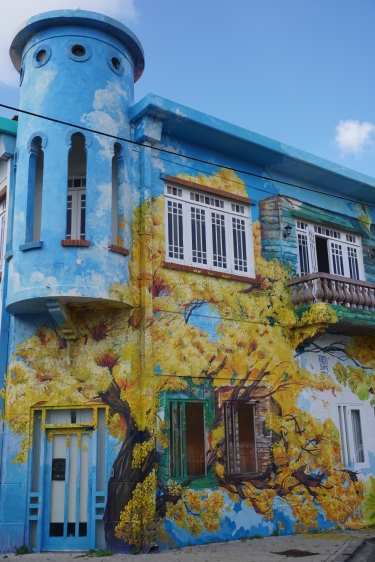 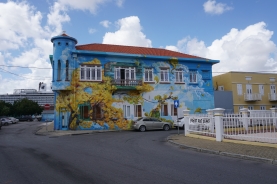 On our way back to the ship we stopped at a little vender’s kiosk on the pier to look at a small piece of jewelry.  It is very pretty; made from iridescent shell, sparkling with the colors of the sea.  Here is a photo of JoAnn speaking with Madeline at Out of the Blue  as they discussed the piece. 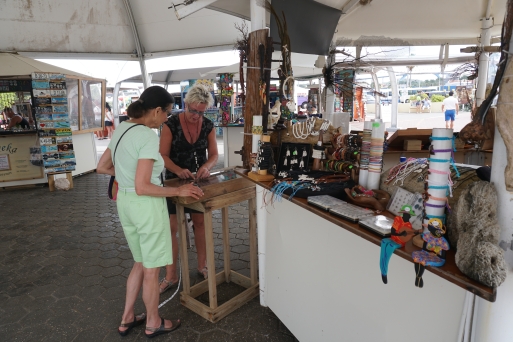 Madeline was very nice and when we asked for a minor modification to the piece she was very accommodating.  Its always nice to find someone like Madeline.

Then, as always, it was back to the ship.  One more port to come, Aruba.