Labor Day weekend found us on the road to the University of Notre Dame.  We had plans to go to the opening-day football game in the newly enlarged stadium.  A friend from high school, Pat, graduated from Notre Dame almost 50 years ago and was to be our guide for the weekend.  After 679 miles on the road we arrived at the University on Friday afternoon.

We were just in time for the pep rally.  Students, alumni, friends and family, by the thousands gathered to be seen and motivated.  Gotta get there, no time to lose.

The crowd was gigantic and energized.  All the residence hall carried their identifying flags showing their support and enthusiasm. 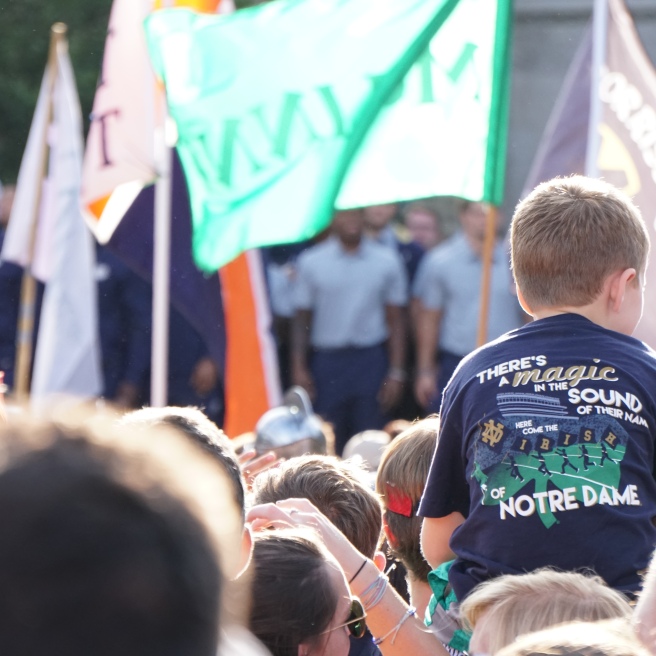 There was even a bagpipe concert in front of the administration building.  It was difficult to get close to anything.  The crowds were enormous and the enthusiasm overwhelming.  Everyone was infected with Irish Spirit.

The University is beautiful.  The architecture represents my romantized idea of a college campus; beautiful grounds, majestic buildings, quads and history.  Here are a couple of photos of the campus. 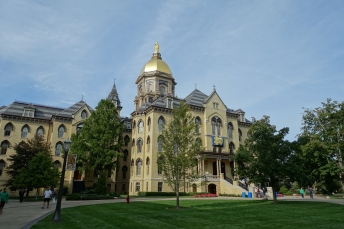 The landscaping is lovely and the grounds are inviting and well manicured.  Just think of the stories the trees could tell if only they could talk. 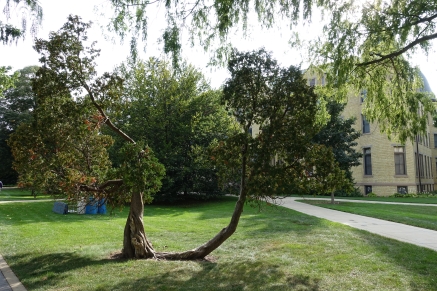 As we strolled around the grounds Pat took us to the oldest building on the campus.  It was the original chapel.

The door was locked but that did not prevent us from taking a peek inside.  Great place for an intimate wedding.

We, as I am wont to do, made a stop at the cemetery.  It is the place of final repose for many of those who served Notre Dame throughout their lifetimes. 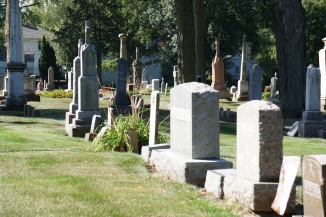 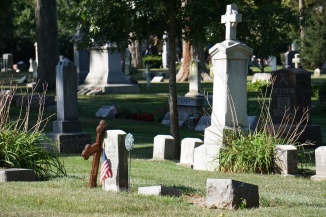 Saturday, game day, first found us visiting the Basilica of the Sacred Heart.  Its art, from its stained glass to its ceiling to its alter and just everything, rivals the best that Rome or Venice or Paris has to offer. 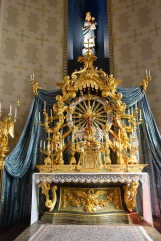 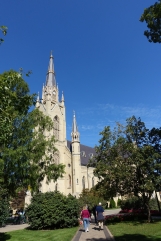 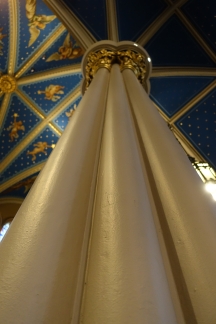 The windows were outstanding vibrant pieces of art. 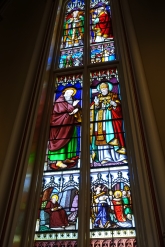 The walls and ceilings were likewise outstanding. 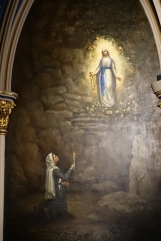 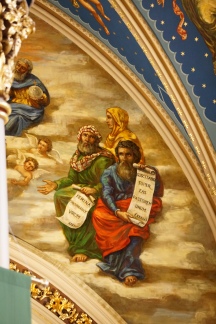 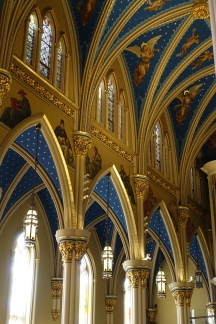 Even with all the activity the clergy were able to concentrate and reflect on the fact that we were in the house of God. 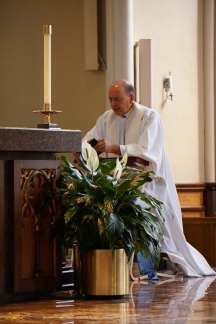 Where to go next, that is the question.  Good thing we had a campus map.

Lets get a shot of the five of us outside the Basilica as we make our way back to stop in the Administration Building. 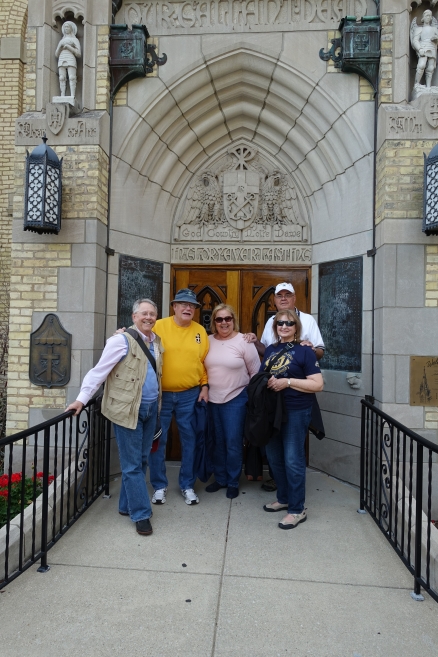 The Administration building was the third built on the campus.  At first it served a multitude of purposes from classrooms to dormitory and dining and, of course, administration.  The dome is the focal point of the University and was added in 1882.  The statue of Mary, The Mother of God, Notre Dame, was a gift from the sisters of St. Mary’s College.  St. Mary’s college is the sister school to Notre Dame and is across the street. 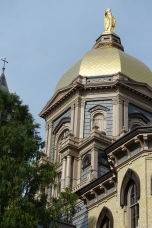 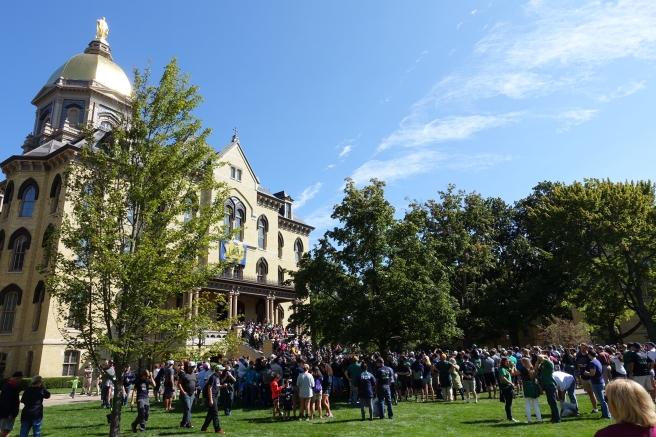 Under the dome, on the inside, is interesting and very pretty.  On game days Trumpets Under the Dome is played as trumpeteers from the marching band gather on the balconies to play for the faithful. 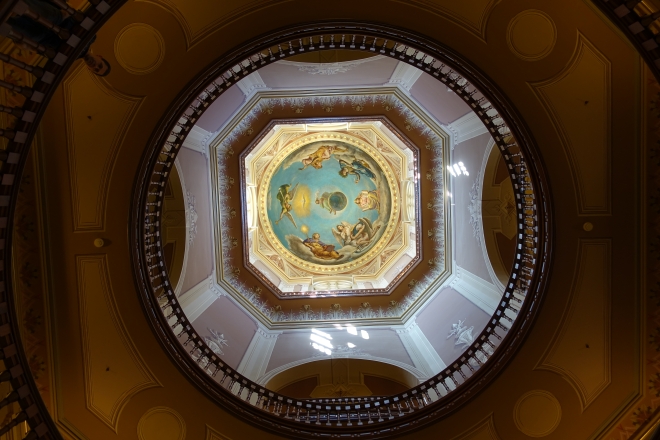 Also on display is a crown created for the statue of Mary on the dome.  It is a beautiful work based on the Rosary.  It is on display because it ultimately was too heavy for its original purpose. 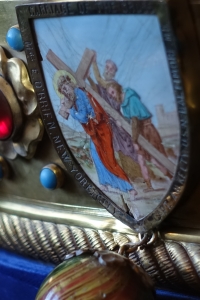 Then it was time for the game.  As we worked our way over to the Stadium, we stopped in the Joyce Center where trophy cases contained mementos of past glories.

On the way we passed the Hesburgh Library with its magnificent mosaic of “The Word of Life,” commonly referred to as “touchdown Jesus.”  The sculpture is of Fathers Hesburgh (on the right) and Joyce, legendary leaders of the University. 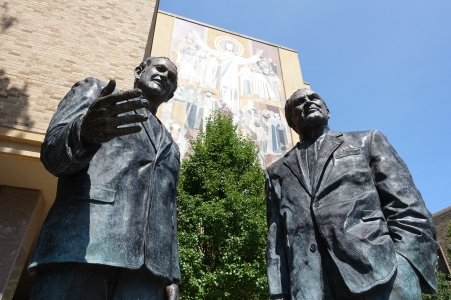 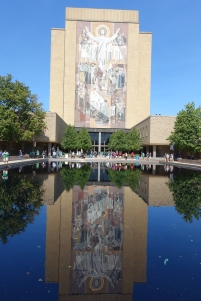 A stop at the “Grotto of Our Lady of Lourdes” where a visiting high school team stopped for a moment of reflection and then onto the stadium for the game.

We had great seats just short of the north end zone.  Here is a picture of me taken prior to kickoff.

And, here come the Fighting Irish of Notre Dame . . . 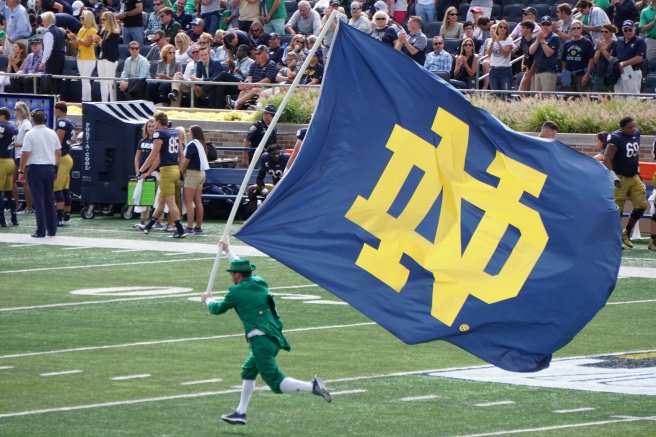 . . . and here come the Owls of Temple University.

The game was entertaining.  I did my best to get some game action photos. 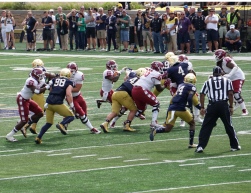 First down and goal to go for the Irish; so says “First Down Moses.”

Notre Dame 49, Temple 18, an Irish victory and the end to a wonderful weekend. 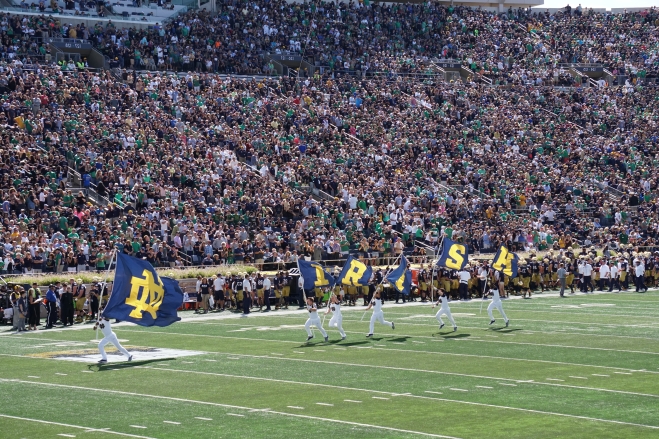