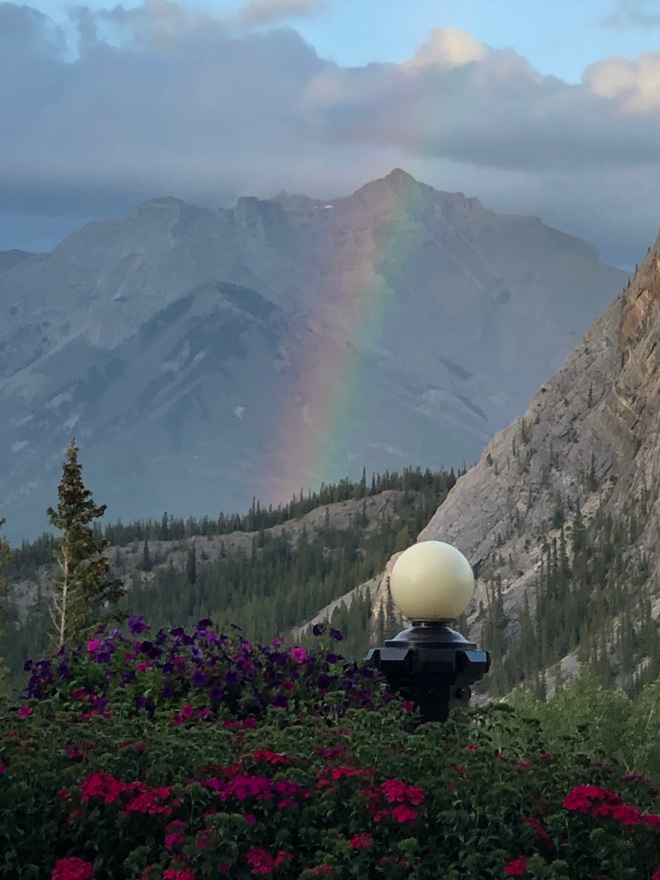 Luggage pickup was scheduled for 6:45 am. Well, as luck would have it, I set the alarm for 6:00pm and not 6:00am. Fortunately I woke at 6:30 and roused JoAnn. What a problem. We needed to finish packing and get the bags out on time. We did it but not without a good bit of anxiety.

Today we were leaving Jasper and heading for Banff via the Icelands Parkway with a stop at the Columbia Icefield. A walk on the Athabasca glacier, and travel in a specially designed ice explorer vehicle to get there, was on the agenda. Imagine walking on 12,000 year old ice formed during the last ice age. Columbia icefield is the largest in the Canadian Rockies. The “roadway,” to and from the glacier, is the steepest road in Canada. I tried to take a photo showing just how steep it is but I’m not sure I did a good job. You be the judge. Here are a couple of photos of the vehicle and the road to the glacier.

Our driver and the cockpit. We sped along at about 6 miles per hour.

It’s difficult to take a photo of the angle as we were heading down; it was about a 30 degree incline. Here is a shot in which I try to impart a feeling for the angle.

Here is another ice explorer as it was moving down the hill and approaching us.

This last photo makes it look like the earth is flat and we are about to fall off the edge.

Then we were on the glacier and strolling around. Here are a few of the area starting with one of JoAnn and me.

And one of JoAnn in front of the explorer. It was enormous.

Then we were back in our comfortable motor coach on the way to Banff.

We arrived at Banff around 4pm. Our rooms were ready and we quickly made our way to room 863 where we were greeted with a spectacular view. First a photo of our room and then of the view. In my opinion it was the best of all the views we enjoyed.

The hotel, designed in the style of a Baronial Palace, is beautiful and impressive, especially from afar. I didn’t take many photos of the hotel but I did capture a couple in the lobby and one or two outside.

Cocktails and dinner tonight was in the Vermillion Room. We originally had reservations for 6:45pm but changed them to 8:00pm. Dinner was excellent. We had a table for two which was near a door to the outside patio and although it was locked from the outside, when people exited through it (as a number of people did) a cool wind blew right across our legs and our table. That was little enough to sacrifice for the view. I just managed to capture the following photo from our vantage point.

What great good luck to be in that place, at that time with a camera at hand.