After we left the Anne Frank House we decided to find a local bar where we could test some beer.  On our way we came upon a street artist, near the museum.  We stopped to look at his work and Barbara bought a small painting. 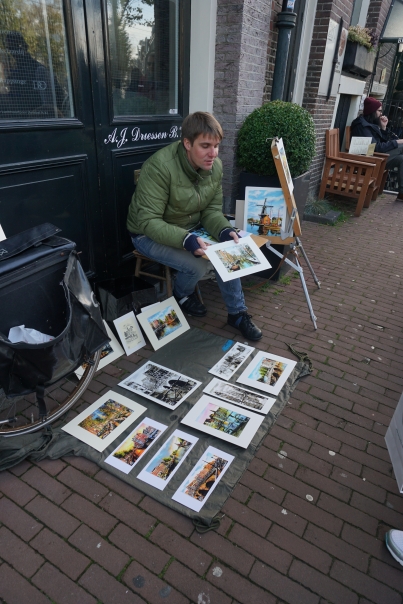 Its not hard to find a bar as they are on just about every corner.  We stopped in an nondescript place on one of the canals and had a couple of brews before deciding to move on.

Here is a view across the canal at buildings that appear to be supporting each other. 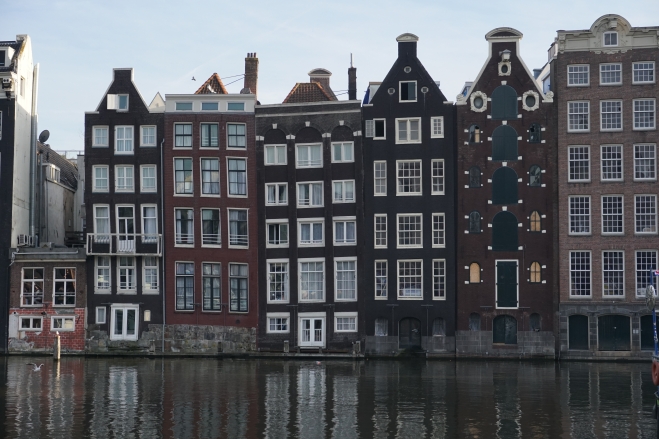 I wanted to see the Westerkerk, with the City’s tallest tower; its located next to the Anne Frank House. 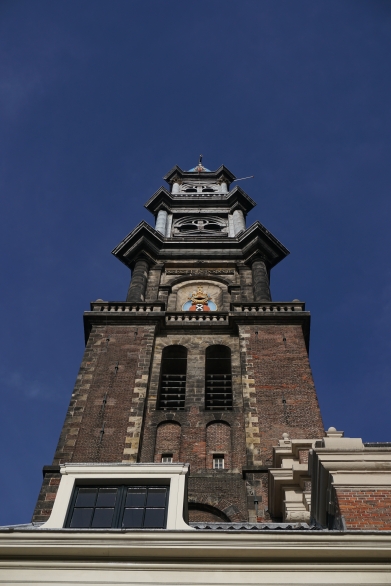 We got there only to find it closed.  Then I said I would like to visit Saint Nicolaasbasiliek, which is located about a mile away, near the Central Station.

As we made our way through the city, we came upon a couple of interesting bikes and I stopped to take a look.  It was then we met Adam and Chet who are building electric assist bikes under the name of “Sazuu.”  Here are a couple of photos of them and their bikes. 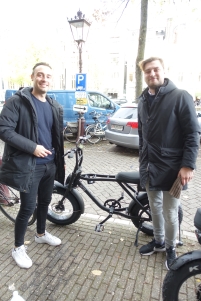 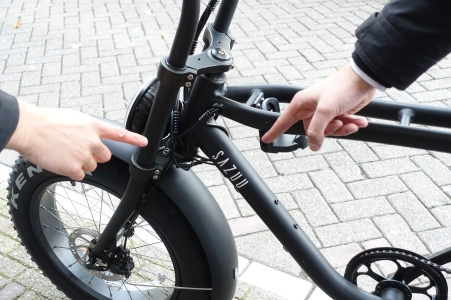 On our way to Saint Nick’s we passed behind the Nieuwe Kerk and I took this shot. 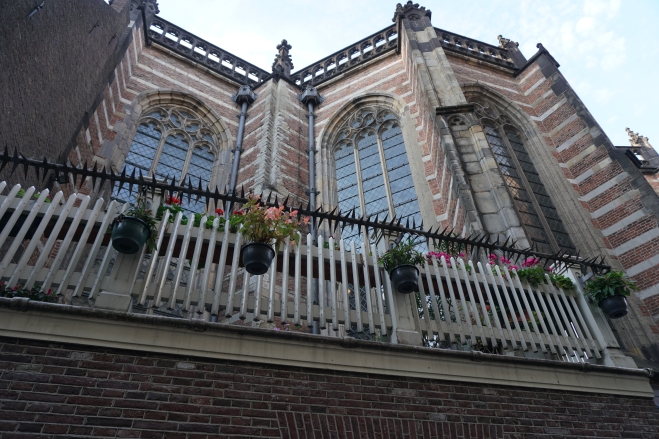 We stopped in the church and I snapped this photo of one of the stained glass windows. 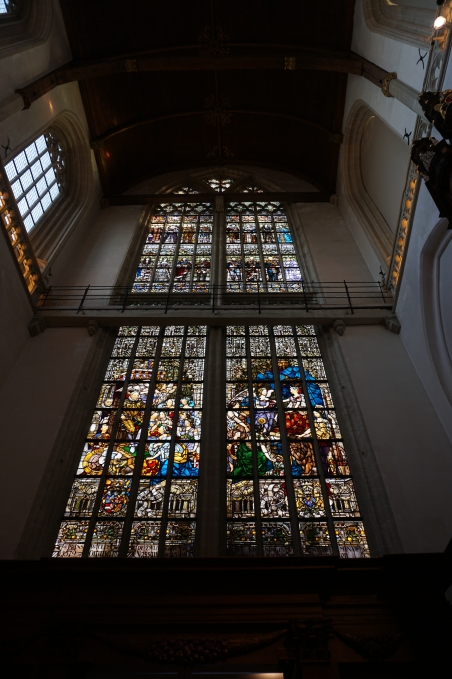 As we made our way down Damrak toward the Central Station and Saint Nick, I decided that I wanted a rest stop and convinced my wife and friends to wait while I found the rest room in the De Bijenkort department store.  I was probably there about ten to fifteen minutes.  I had to travel from the zero level, the ground floor, to the fifth level and back again.

Well, when we arrived at Saint Nicolaasbasiliek it was closed.  It closed at 3pm on Saturdays and we arrived at 3:05 pm.  For the want of a pee we missed a basilica.  My bad!  So to console ourselves we stopped in the bar almost immediately next door, the Zeepost Amsterdam, to have a couple of beers.  It was there that we met Annie Maguire.    She was a delight. 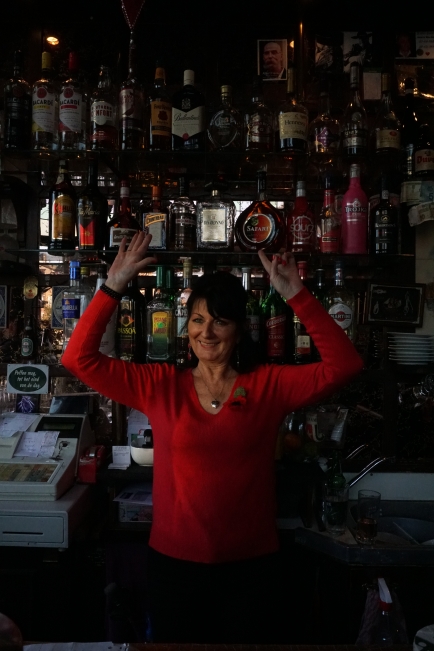 Here is a photo of Annie, JoAnn and me.  She invited us behind the bar for the shot. 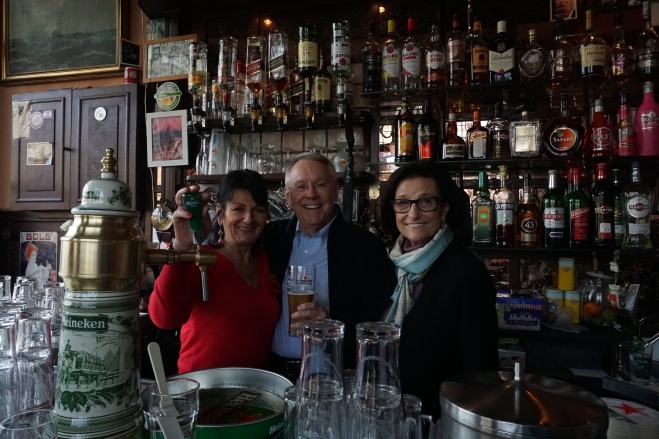 We had a great time and she was a great host.  There were a couple of regulars there when we arrived.  One was Annie’s son-in-law who was in town from Hamburg to visit his son.  Nice guy and very interesting to talk to.

Following a good time at the Zeepost, we returned to the Banks for cocktails and to figure out what we would do for dinner.  We decided to walk over to Rembrandt Plaza to see if we could get into Brasserie Schiller; and we did.  Nice place, good food but the service was more than a little slow.

Here are a few additional shots I took during the day that I think are interesting.  Click on a photo to enlarge it and start a slide show. 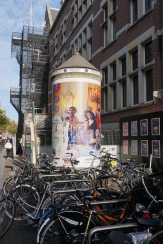 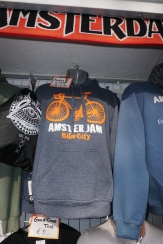 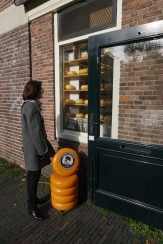 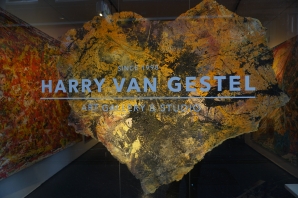 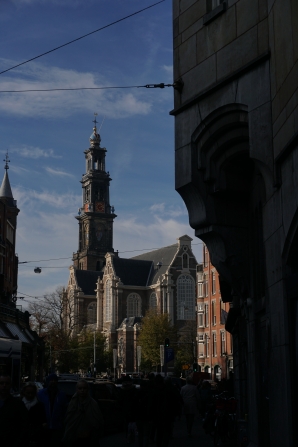 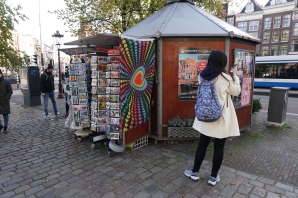 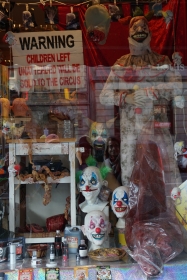 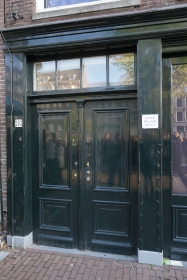 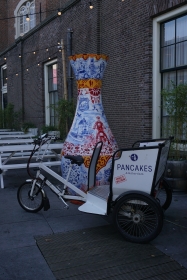 Then, it was good night Amsterdam.