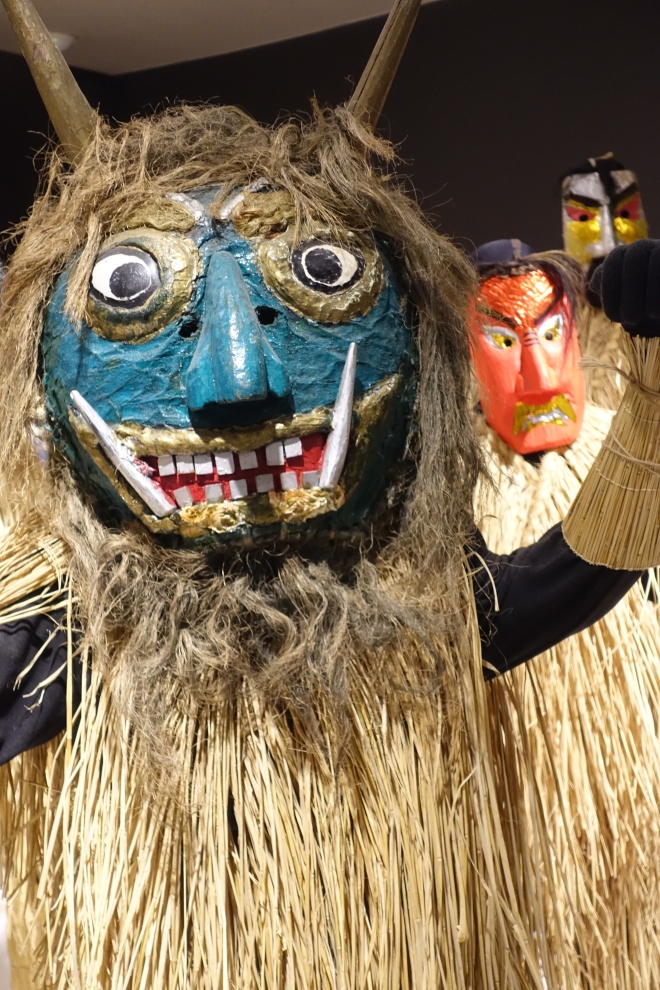 The trip from Hakodate to Akita was smooth and comfortable.  The weather Gods are blessing us with a couple of good days.  The sun is shining, the air warm and the breeze is essentially a memory.

As we sailed into Akita, I noticed windmills, garnering electrical power.  There are windmills and solar panels all around mixed among the rice paddies.  Japan is serious about looking for an option to carbon based fuels.

We started our Azamara tour with a ride to the Kanpuzan Observatory.  The bus made its way up the mountain to a height of about 300 meters or 984.25 feet.  The view from the top was spectacular save for the haze on the horizon.  At the top there is a rotating floor which, in approximately 10 minutes, provides a 360 degree view of the Akita area.  Here are a couple of shots from there.

While JoAnn and I were sitting on the rotating floor, I decided to attach my iPhone to a small handle that doubles as a tripod to which I can attach a small shutter release.  Well, as I futzed around putting all this together, I knocked the shutter release off of the handle and over the edge of the floor.  I could hear it hit bottom, but the bottom of what I wasn’t sure.  I really liked that shutter release as it makes taking pictures with the iPhone much easier.

So, I walked down the 100 steps we came up 12 minutes ago to see if I could get some help.  How lucky could I get, with the help of G Translate I was able to explain what happened and get some help.  A nice fellow from the observatory, obviously used to this problem, and I walked up the 100 steps back to the place of my problem.  I thought he was going to have to stop the floor and announce to all that would listen that some buffoon dropped something over the side and he was going to get it.

Nothing that drastic; after I told him where it fell, he jumped over the small glass barrier that keeps people from the edge, dropped down about three feet and grabbed my shutter release.  He handed it to me, I said “arigato,” and he returned down stairs.  Crisis over.

Our next stop was the Namahage Cultural Center and museum.

Legend is that the Namahage, demonic like characters that appear on New Year’s Eve, masked and dressed in straw,

visit the homes of villagers to encourage the children of the community to work hard and obey their parents.  We saw a video taken on a recent New Year’s Eve of the event.  Scary looking Namahage stomped 7 times outside someone’s home and were then invited to enter by the head of the house.  Youngsters being held tight by their parents were grabbed by the Namahage, ripped from the bosom of their parents, to be terrorized by the demons.

We then watched an enactment of the night of the Namahage.  After being escorted into what appears to be a traditional Japanese house, we were seated on tatami mats as we watched the head of the house prepare for the Namahage’s arrival. I can tell you this, I am not made for tatami mats; flexibility is not my middle name and it was 20 minutes of squirming, fussing and pain.  Here is a photo of the head of the house.

Shortly thereafter a loud bang occurred as the Namahage slammed open the home’s sliding door.  The two demons stomped 7 times (stomping 7 times before entering is traditional) entered the living room and banged around, “scaring” a couple of our companions.

The head of the house prepared a meal for each of them.

Sitting down, they engaged in a discussion with the head of the house. It was quite animated but all in Japanese. They could have been talking about the weather for all we knew but they seemed very intense.

Once the conversation was finished, the Namahage stood, banged around some more, stomped 3 times and left.  The entire enactment lasted about 20 minutes and was conducted, as I said, entirely in Japanese.

We stopped after the performance to watch a craftsman working on a Namahage mask.

From there it was a short trek up to the adjacent shrine where I took a couple of photos.  Have a look.

The forest around the shrine was lovely. I thought this photo was interesting.

Then it was back to the ship only to set sail for Kanagawa. Sunset was beautiful.

The “nightmare” of the Namahage only a fading memory.